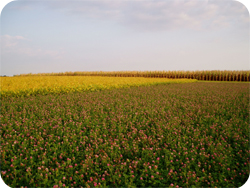 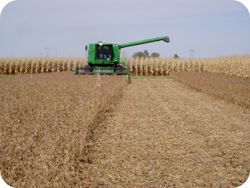 Extending the conventional corn-soybean rotation with small grains and forages, such as clover and alfalfa, can reduce requirements for purchased inputs and petrochemical energy. An interdisciplinary team of researchers, from several ISU departments, the USDA Agricultural Research Service, the University of Minnesota and the University of Illinois, is conducting an experiment to compare the performance of two-, three- and four-year crop rotation systems.

The overall objective is to develop diversified crop rotations that will help maintain yields, minimize requirements for synthetic fertilizers and herbicides, reduce production costs, maintain or increase net returns, and protect environmental quality. The experiment began in 2002 at the ISU Marsden Farm in Boone County, Iowa.

The goals of the Cropping Systems Research Team:

The cropping systems studied are:

The latest findings from this research continue to be positive: diversifying the crop system and integrating livestock consistently boost productivity, profitability and environmental health. The updated findings reflect data from 2006 through 2014. The project baseline was 2001-2002, with a 2003-2005 start-up period.

This project has been funded by the Leopold Center for Sustainable Agriculture, U.S. Department of Agriculture National Research Initiative, Iowa Soybean Association, and The Organic Center.