What is a food hub?

According to the National Food Hub Collaboration, a partnership sponsored by the Wallace Center’s National Good Food Network:

“A regional food hub is a business or organization that actively manages the aggregation, distribution, and marketing of source-identified food products primarily from local and regional producers to strengthen their ability to satisfy wholesale, retail, and institutional demand.”

Food hubs are a critical link in bringing local foods from the farm to high-volume, mainstream outlets such as grocery stores, restaurants and institutions. As such, food hubs are the local food movement's answer to bringing high quality food to families of all income levels.

Food hubs also may offer education and training to farmers to increase their capacity to meet high-volume demand. In addition, they play a key role in providing healthy, locally grown food in places where people of all backgrounds live, shop, work and play.

A January 2015 report to Congress by the USDA’s Economic Research Service (ERS) shows that markets for local foods are shifting while sales continue to rise. Local food sales in 2012 accounted for an estimated $6.1 billion in the U.S. economy. In the same year, local food sales peaked in direct-to-consumer markets such as farmers markets and community supported agriculture (CSA).

However, other markets for local food are expanding rapidly. This would include larger-volume mainstream markets such as grocery stores, institutions such as schools and hospitals, and food hubs. For example, according to the USDA, the number of school districts with farm-to-school programs that use local foods increased 430 percent from 2006 to 2012. Moreover, a 2014 Leopold Center report showed that in 2013, grocery stores sales accounted for 68 percent of tracked local food sales in Iowa.

In some cases, food hubs are providing the product to these “intermediated” or institutional markets. The ERS reports that since 2006, the number of food hubs has increased by 288 percent to 302 throughout the country. The USDA has counted six in Iowa (or two percent of all food hubs). However, a February 2015 study of food hubs led by the Leopold Center with Iowa local food leaders suggests the USDA figure grossly underestimates the number of food hubs in Iowa. Information collected from food hub managers and regional food coordinators across the state show that Iowa has 31 food hubs or centers of food hub-related activity—five times more than the USDA estimate.

What do we know about food hubs in Iowa?

In 2014, Ag Ventures Alliance, a group of agricultural investors based in north central Iowa, awarded funds to a team of local and regional food leaders and researchers for a study of food hubs in Iowa. The goal was to better understand the current state of food hub development and create recommendations, if warranted, to support further work. Additional funding was provided by the USDA's Iowa Sustainable Agriculture Research and Education (SARE) Professional Development Program. This study was the first coordinated attempt to examine food hub development in Iowa.

The study included two surveys: one to Iowa food hub managers and another to regional food coordinators. The Leopold Center published the results in a February 2015 report showing that food hubs play a significant role in Iowa’s local and regional food economy by supporting 40 jobs and purchasing $4.5 million in food from more than 450 Iowa farmers. 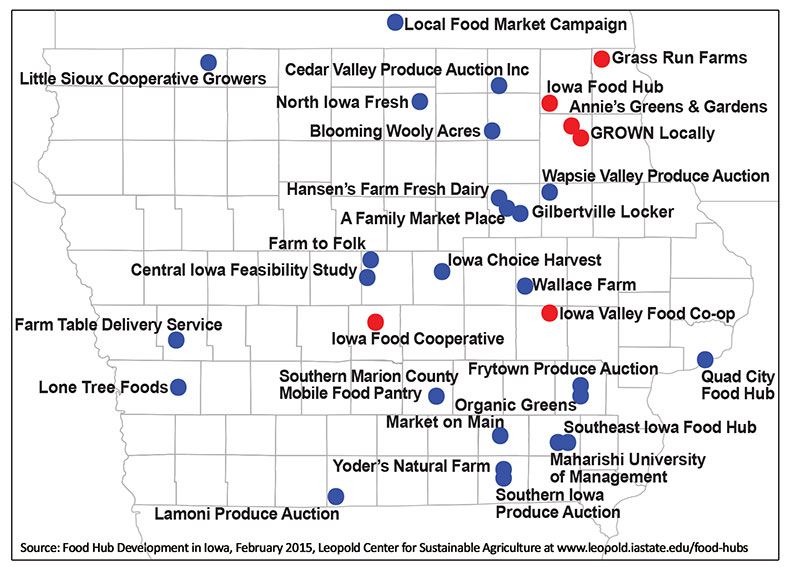 Data collected from food hub managers and regional food coordinators across Iowa show that the state has 31 food hubs or centers of food hub-related activity, shown above.

More information about the overall characteristics, structures, funding, goals and products are available in this February 2015 report, Food Hub Development in Iowa: Lessons learned from a study of food hub managers and regional food coordinators, published by the Leopold Center for Sustainable Agriculture.