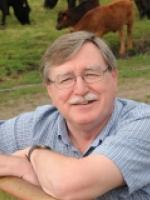 Mark Rasmussen began work June 1, 2012 as permanent director of the Leopold Center. His appointment followed a long and successful career as a research microbiologist at the National Animal Disease Center, the USDA’s Agricultural Research Service facility in Ames, Iowa; and the U.S. Food and Drug Administration’s Center for Veterinary Medicine in Laurel, Maryland. He comes to the Center with extensive and diverse experience in teaching, administration and private industry and has farmed full-time in Nebraska.

In addition to serving as director of the Leopold Center, Rasmussen is a tenured professor in the Iowa State Department of Animal Science. He plans to establish a director’s research program at ISU, reflecting his current interests in microbiology and climate change.

Prior to his return to Ames, he was supervisory microbiologist and research director at the Center for Veterinary Medicine. In that position he provided technical guidance and research support for regulatory decisions on drugs, feed additives and contaminants in animal feeds. While at the center, he focused on the microbiology of animal feed, including work on distiller’s grains, and the use of plant secondary compounds to prevent bacteria in an animal’s gastrointestinal tract from becoming resistant to antimicrobial drugs.

From 1988 to 2006, Rasmussen was a scientist and later research leader at the USDA-ARS National Animal Disease Center facility in Ames. He managed food safety research including projects on E. coli, Salmonella, antibiotic resistance, plant toxins and gut microbiology/ecology. He holds two patents (1995 and 1999) related to his research, notably for optical scanning instrumentation that detects contamination on beef carcasses. This imaging technology recently was recognized by ISU as ranking 14th in lifetime earnings generated for the university as a result of technology transfer activities.

He has held research positions in private industry including development of methods to cultivate algae for capturing carbon dioxide from coal-fired utility plant emissions. He received the USDA Honor Award for Food Safety in 2004, the ARS Award for Superior Technology Transfer Achievement in 2003 and a 2001 Iowa “da Vinci” citation for science, engineering and technology development.