Paul Johnson and Seth Watkins, winners of the 2018 Spencer Awards, accepted their plaques March 13 at the Iowa Water Conference.

Johnson, who co-wrote Iowa’s landmark Groundwater Protection Act as a state legislator, and Watkins, who farms sustainably near Clarinda were presented the awards by Elaine Spencer, a member of the family that funded the award, and Mark Rasmussen, director of the Leopold Center.

The Spencer Award is one of the largest and longest running awards of its kind in Iowa. Administered by the Leopold Center, the award recognizes researchers, teachers and farmers who have contributed significantly to the environmental and economic stability of the Iowa farming community.

From left:  Rasmussen, Johnson and Spencer. 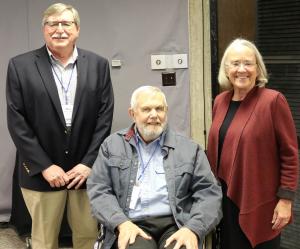 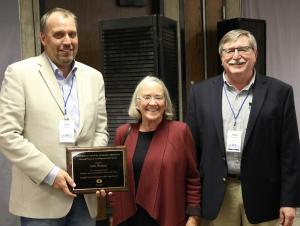 From left:  Watkins, Spencer and Rasmussen.