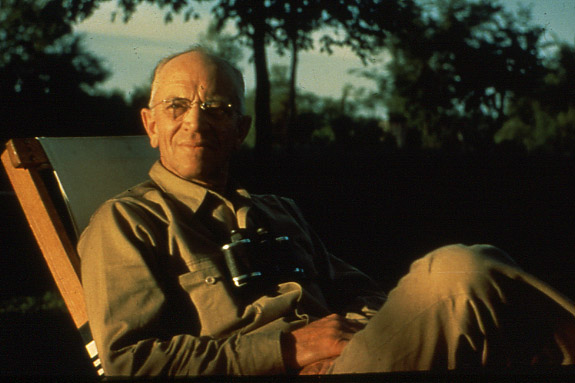 A land ethic changes the role of Homo sapiens from conqueror of the land-community to plain member and citizen of it. It implies respect for his fellow-members and also respect for the community as such.
— Aldo Leopold, 1887-1948

The Leopold Center is named for Aldo Leopold, a native of Burlington, Iowa, who saw a need for wise use of land and water resources. The internationally known conservationist, ecologist, and educator devoted his life to planting seeds of thought about how farming should be productive but not interfere with natural systems.

During his 61 years, he published nearly 500 works including technical reports, speeches, textbooks, newsletters, reviews and even a few poems. But he is best-known for A Sand County Almanac, a collection of 41 essays published after his death in 1948.

This book has been compared to Henry David Thoreau's Walden, Rachel Carson's Silent Spring and the works of John Muir. Many of the essays focused on the the birds, animals and plants surrounding Leopold's weekend home (called "the Shack") on the Wisconsin River north of Madison.  In this book, Leopold outlined his famous "land ethic" and development of an ecological conscience.

An early graduate from Yale University's School of Forestry, Leopold worked many years for the U.S. Forest Service in the Arizona and New Mexico territories. He also was a game consultant, and chaired the country's first Department of Game Management at the University of Wisconsin. He helped found the Wilderness Society and the Wildlife Society and was active in numerous conservation organizations.

Leopold Week in Iowa: The first week in March has been set aside annually to celebrate Aldo Leopold's legacy in Iowa. Read the Govenor's Proclamation [PDF] that provided for this special commemoration.

Have you seen the movie? Green Fire: Aldo Leopold and a Land Ethic for Our Time is the first full-length documentary about Aldo Leopold, produced by as a partnership between the Aldo Leopold Foundation, the Center for Humans and Nature, and the US Forest Service. Visit the Green Fire website.

Read an essay from the Des Moines Register by Dennis Keeney, the Center's first director

Aldo Leopold Leadership Program Fellowships for up to 20 scientists each year, established in 1998

Aldo Leopold Archives at the University of Wisconsin-Madison

Leopold photograph is part of the University of Wisconsin's Libraries Digital Collection. Image used with permission.